Secular Rescue is a program of the Center for Inquiry that identifies those writers, activists, and everyday citizens in countries such as Bangladesh, Pakistan, and Iraq who live under the threat of violence and death and provides financial and diplomatic assistance to help them escape to safety.

The Center for Inquiry’s international work for free expression and the rights of the nonreligious comes in many forms and takes place in different arenas, but they are not mutually exclusive. Here’s an example of what happens when different programs support the other and become better in the process.

For International Blasphemy Rights Day last year, CFI published a short piece by Sudanese writer Mohamed Salih Aldsogi, “On Apostasy And Blasphemy In Sudan,” in which he explained the relatively recent history of the country’s blasphemy laws. “This oppressive state of affairs that robs citizens of their basic freedoms of thought and expression has to end,” he wrote, concluding, “Sudanese secular humanists have a major role to play in making such a future possible.”

It’s no surprise, then, that Salih was not only a critic of Islamic extremism in his country, but also a target. Salih reached out to CFI’s Secular Rescue program for help, and we are very happy to report that Salih is now not only out of immediate danger in Sudan, but in truly excellent company.

Salih is in Kenya, working right alongside CFI Kenya Director George Ongere. Like Secular Rescue, CFI Kenya is a true source of inspiration, operating the Humanist Orphans Center, the Ron Lindsay Library (named for our former president and CEO), and most recently their outreach office on the campus of Maseno University in Kisumu.

“Mohamed Salih demonstrated courage in Sudan,” George told us. “Salih is kind, respectful, open-minded, a friend, a free person, and a very intelligent person.” George reports that Salih will be helping to coordinate the university office, visiting with the Humanist Orphans, and helping to supervise other charitable programs.

Different facets of CFI’s international work can augment and galvanize each other, making all of them stronger and their capacity for doing good even greater. 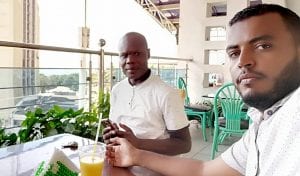